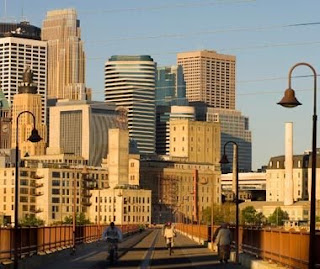 Travel and Leisure cover the top biking cities around the world. It was good to see Portland, Seattle, and Minneapolis on the list.


Open the garage, grip the handlebars, stand on the pedals, and go. That’s all it takes for Joseph Duffy, a graphic designer in Minneapolis, to start his morning commute to work. But what lies ahead—a 15-mile route starting on converted railroad beds in the suburbs and ending on the dedicated bike lanes of the city’s downtown core—is a trip made possible only by a decade of planning to make the city fully compatible with two-wheeled transit.

Like many of the world’s best biking cities, Minneapolis has built an infrastructure that promotes bicycling on many fronts. From bike lockers and designated street lanes to recreational trails and snowplows dedicated to clearing off-street paths, a system exists to make transportation on a bike efficient, safe, and hassle-free.

Check out the slide show here.
Posted by mides@hunter.cuny.edu at 6:00 AM