Wind Turbines (the good and the bad) 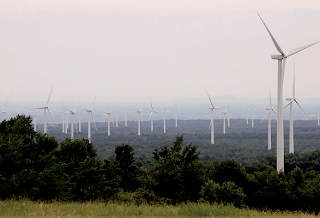 Wind Turbines were all the talk last week in NYC after the mayor stated that they should be a part of the city's future and key to his 2030 plan. This New York Times photo essay and article demonstrates that not everyone is as excited about alternative energy.

Supporters of the wind turbines say that the towers bring in badly needed new tax revenue on land that would otherwise be empty. "We see this industry coming, we see the payments coming in," said William K. Wood, a former Burke town board member. The school board of Chateaugay, he pointed out, received $332,800 this year from Noble for payments in lieu of taxes, money the district used to lower school taxes, upgrade its computers and provide a pre-kindergarten class for the first time

In these small towns near the Canadian border, families and friendships have been driven apart by feuds over the lease options, which can be worth tens of thousands of dollars a year. These are towns where the median income can hover in the $30,000 range. Rumors circulate about neighbors who can suddenly afford new tractors or trucks. Opponents of the wind towers even say they have received threats; one activist said that on two occasions, she found her car windshield bashed in. 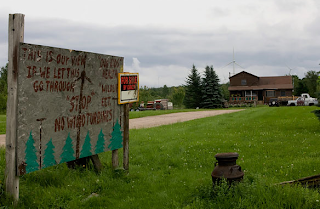 As we turn to alternatives to provide us the energy we need, this type of situation is going to become more common in all areas. It is difficult to navigate what is best for a community while determining the financial benefits. Are wind farms the answer or should we be incorporating wind turbines into our everyday lives and environment?
Posted by mides@hunter.cuny.edu at 6:00 AM