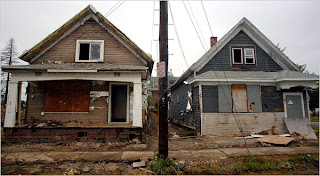 In New York City, recently IKEA was able to do what the city has not. Ikea created a new waterfront promenade, park, water taxi, and bus service to its Red Hook location. It has become common knowledge that many Red Hook residents use these services (especially the transportation) and have come to an equilibrium with the new Blue Giant in their neighborhood. Have we reached a time where local governments are not able (or willing) to get the things done that will improve and enhance the quality of life for our neighborhoods and communities, but rather would let the private sector do it for them?

This article discusses what many of the cities (Buffalo, Carbondale, Cleveland, Flagstaff, Los Angeles) losing population and hit with foreclosure are doing:

The best way to fight the tide, he says, is for each community and neighborhood to develop its own strategy based on the local economy and housing market. Schilling recommends that the redevelopment of large numbers of abandoned buildings happen in three phases. First, cities must stabilize neighborhoods by either demolishing vacant properties or acquiring them for redevelopment. Next, officials must establish a plan that focuses on how to reclaim vacant properties at the neighborhood level. Finally, cities must offer incentives—perks such as tax credits or expedited permitting—in order to lure back private developers and investors who would otherwise be disinterested.

This article discusses what developers are doing to change the image of Newark, Trenton, and Union City. Not only are private developers stepping in to create new housing, they are focusing on the amenities that need to come with new housing:

They got through it by using every stigma-fading technique they could think of. One was to put cheery pro-Newark ads on thousands of coffee cup sleeves for commuters between the Pennsylvania Stations in Manhattan and Newark; another was to install $800,000 worth of safety-enhancing new lighting on the exterior of Eleven80, a converted Art Deco office structure. The efforts seem to have paid off: 85 percent of the units, which rent for $1,650 to $3,895, were leased during the first year.

In Trenton, Michael Goldstein of HHG Development Associates labors at the same two-pronged task, by means of his Hidden Trenton Web site. Mr. Goldstein established hiddentrenton.com in 2006, just as he and partners were proposing a renovation project in the Ferry District, one of the city’s more-or-less-defunct neighborhoods. Writing virtually all the material himself, Mr. Goldstein, a former technology company executive, posts items about Trenton’s restaurants, recreation and ambience. (Representative headlines from the site include “Divine Guatemalan Dive” and “North Trenton Brewskis.”)

“There’s a nice little blue-collar neighborhood already here,” said Marco Tartaglia, director of sales for Canco, “a great Indian restaurant, a fabulous bakery, and little convenience shops along the way to Journal Square and the PATH station — but the factory property was neglected, and there is still a lot of graffiti on the streets around it, and litter.” The Canco developer, Coalco New York, has “deputized” employees as graffiti removers, Mr. Tartaglia said. “We also fixed up the beat-up basketball court on St. Paul’s Avenue,” he added. “These are things that matter to people when they come to a neighborhood and look it over. Whatever they’ve heard, or might remember about the area in its darker days, we want them to get a picture in their minds about its best side now.”

I believe that private/public partnerships are usually to everyone's benefit, but it seems these days, with lack of revenues and budget cuts, that cities are instead selling or contracting out everything. Cash infusions now are not going to help in the next 6 months, years, or decades. Cities need to make hard choices, but need to start laying the groundwork for their futures if they don't want another fifty years of disinvestment and population lost.

Update: Here is a recent article about the private sector funding the nation's infrastrucutre improvements.
Posted by mides@hunter.cuny.edu at 6:00 AM