Are Streetcars the Answer? 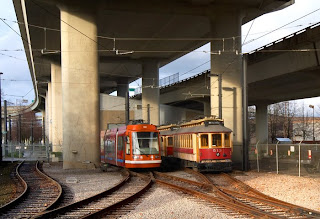 BRT gets a lot of attention these days for its ability to move people and is a fraction of the cost of building a rail line. As with any bus route, even BRT, some people are fearful that BRT lines can be taken away just as quickly as they sprang up. Because of that many cities are looking to the streetcar as a downtown solution to improve connectivity and have a permanent transportation improvement. Of course the business and real estate community like this because it will provide for more economic development opportunities along these new corridors.

This New York Times Story discusses exactly that in the city of Cincinnati. How smaller cities, take note larger big brothers, are seriously taking a look at creating a streetcar line. While the majority of cities had them at one time, most have not had an active streetcar line in the past 50 years.

At least 40 other cities are exploring streetcar plans to spur economic development, ease traffic congestion and draw young professionals and empty-nest baby boomers back from the suburbs, according to the Community Streetcar Coalition, which includes city officials, transit authorities and engineers who advocate streetcar construction.

More than a dozen have existing lines, including New Orleans, which is restoring a system devastated by Hurricane Katrina. And Denver, Houston, Salt Lake City and Charlotte, N.C., have introduced or are planning to introduce streetcars.

While any new transit line with spur TOD, what is more exciting is putting down that first line. If cities can re-establish a streetcar line it makes it much easier to expand and create a network down the road. Portland has been the shining example and how it has incorporated its Streetcar line into the existing mass transit system with logical connections to light rail and buses. 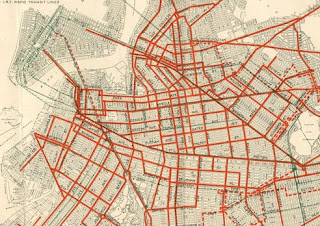 We only need to look at the past to realize the potential that streetcars can once again have in American cities. This post from Starts and Fits does a good explanation of how New York City's streetcars played a vital role in development and the sheer amount of people transit was moving over 100 years ago. While critics complain about costs and the death of merchant parking, the cities who don't want to see their streets as parking lots 20 years from now, are making the hard, but right choice.
Posted by mides@hunter.cuny.edu at 4:55 AM