Is this the Onion? 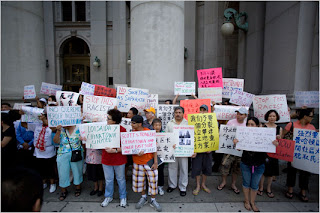 The Daily News had this article about NYC Department of City Plannings Commissioner Amanda Burden. I really thought is was an Onion article because the article portrayed the commissioner as a community planner that is looking out for the residents, that could not be farther from the truth.

To understand communities, Burden walks miles of city streets. Armed with a tape measure, sunglasses and comfortable yet stylish shoes (she is, after all, a former socialite), the planning commissioner eyes building heights, studies the flow of people and contemplates how an area's past relates to its present and future.

"It's my job to affect the process for the betterment of the people who live here, shop here and own businesses here," says Burden, pointing to the row of iron fire escapes that give a sculptural frame to the brown brick tenement buildings of the lower East Side.

"I picture myself part of the community. Here, there is a vibrant commercial and residential history. We want to keep ground-floor retail and ensure nothing can be built that will take away from the symmetry of these historic buildings. The magic here is in the density of people using these streets and living together."

Burden's right, and locals love her approach. "I came to be close to the artists who live and create here," says Nina Garbiras, a successful actress who owns Fig, a European antique store and design business on Ludlow St. "The constancy of interesting people walking into the store is a big reason why it works."

It looks as if the community begs to differ.

Josephine Lee, an organizer with the coalition said, “We are trying to stop the plan its tracks.” She said that city officials has also talked about a separate Chinatown rezoning plan, which they oppose. “We believe that will isolate and divide the community even more,” she said. Anything less than including the entire community district in one plan will cause massive displacement of the community.”

The protesters argue that the rezoning only protects the more affluent and white areas from over development, while excluding the poorer, predominantly Asian-American and Latino neighborhoods. Using 2000 Census data, they point out that while Community Board 3 is 28 percent white, almost three-quarters (73 percent) of that population sits in the rezoned area. In contrast, Asian-Americans are a greater percentage of Community Board 3, at 35 percent of the population, but fewer than a quarter of that population (23 percent) live in the rezoned area. And only 37 percent of Latinos live in the protected area, even though they are roughly the same percentage as the population as whites for the Community Board as a whole.

Check out this NY1 video and one of my recent posts discussing the effects of rezoning on NYC neighborhoods.
Posted by mides@hunter.cuny.edu at 6:00 AM