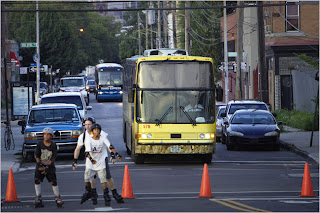 IKEA might have never provided the bike parking that many New Yorker's wanted, but this NY Times article illustrates that having the big blue box store in Red Hook is not as bad as residents thought.

But since the store opened, something unexpected has happened. Ikea has won grudging acceptance from some of its detractors, who admit, somewhat sheepishly, that the feared blue box has brought perks enjoyed even by those who have no interest in stepping into the store.

There is the daily water taxi and shuttle bus service provided free by Ikea, technically for its customers. But for residents, the boats and buses have made the hard-to-reach neighborhood without a subway stop a little less remote; the ferries in particular have given them a picturesque way to travel between Manhattan and Red Hook.

The grassy waterfront esplanade that Ikea built, featuring benches with a view of the Lower Manhattan skyline, framed by remnants of Red Hook’s maritime past, is also catching on as a neighborhood attraction.

And the onslaught of Ikea-generated traffic that so many predicted has yet to materialize. Indeed, traffic is so light on some days that a rumor started among locals that Ikea was actually turning out to be a customer-starved failure (Ikea said its store was meeting its financial expectations).

It makes sense that residents are embracing the store and the services it is providing. The residents of Red Hook for years have been neglected by the city and now have an entity that is providing them with free public transit and access to the waterfront. IKEA has been able to improve the quality of life for Red Hook residents, something the city has not been able to do. So what's not to like?
Posted by mides@hunter.cuny.edu at 6:11 AM