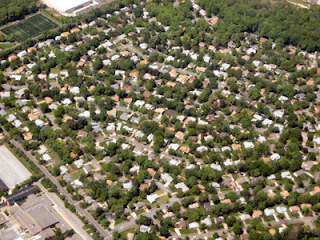 This article in New Geography challenges the idea that suburbs sprouted around cities because of the flight from inner-cities. Instead, it argues that what we really have, in most cases, is an exodus from rural areas to the suburbs, by default creating more density. Here is an excerpt:

Most suburban growth is not the result of declining core city populations, but is rather a consequence of people moving from rural areas and small towns to the major metropolitan areas. It is the appeal of large metropolitan places that drives suburban growth.

Unlike the cases above, however, most core cities gained population. This includes all in Canada, Australia and New Zealand and many in the United States. As a result, none of the suburban growth in the corresponding metropolitan areas can be attributed to an exodus from the city, because there, on balance, was no exodus.

Suburbanization is often characterized as reducing densities, but in fact it has done just the opposite. Most suburbanites come from smaller places; they may prefer suburbs because they are less dense, safer, or simply more manageable than the core cities. But they are also, almost invariably, more dense than where they lived before. Suburbanization is thus a densifying dynamic, albeit one that is less dramatic than preferred by many planners and architects.

What do you all think? Does this article and theory hold water?
Posted by mides@hunter.cuny.edu at 1:45 PM

This may perhaps only be a peripheral thought rather than a direct response, but I think some suburban residents don't understand the role of the city. They want the big yard, and they probably work in another suburb, so they don't understand why we should spend so much money on the core city, never realizing that their precious suburb wouldn't exist without the density and amenities of the cities (like an airport, for example), nor would it function without some of the lower income residents of the inner city working the menial jobs.

Here in Germany, there is strong statistical evidence that most suburbanisation stems from migration out of the city into the surrounding counties/suburbia.

This is an easily-refuted argument. The assumption is that all in-migration is heading to the growing areas of the metropolitan area. In fact, the most typical migration pattern during the mid-20th century was from rural to city and simultaneously from city to suburb.

I guess Cox has never heard of something called the Great Migration- 10 million African-Americans moving from the rural South to urban settings from 1915-1970. Or the 2 million mostly rural Puerto Ricans who moved to mainland cities after WWII? Or white flight, which a majority of white families in cities participated in in the 20th Century?

Cox is making a mistake that my first year students make in interepreting demographics. He is certainly identifying a trend that may be driving the expansion of large third world cities, like Lagos, but does not explain mid-20th century suburbanization in America. The decline of rural population was more an early 20th century phenomenon than a late 20th century phenomenon.