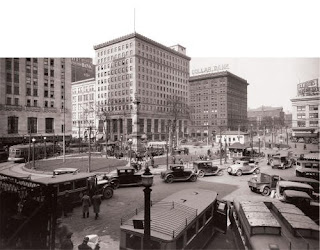 Growth, growth, and more growth is all that seems to be talked about these days. I have to say it was great to see the topic of shrinking cities come up a few times at the 2009 APA conference. Some planners are actually dealing with issues of lost economic base, population loss, and vacant land. Growth, and smart growth, plays no role in the lives of residents in Youngstown, Flint, or Detroit. Instead new models and approaches need to be taken to deal with the issues for cities that are shrinking in size. It is a great opportunity for reuse, preservation, and open space. This article in Crosscut is a good example of many of the concepts.

A big question facing urbanists is, what to do with shrunken cities? One possibility would be re-populating them. Could the New Homestead Act be revised to give a boost to places urban zones like Detroit? Isn't it more environmentally sustainable to re-populate existing cities where land has already been cleared, infrastructure is in place, and homes can be re-inhabited? Possibly. But in very distressed urban areas that cannot count on a resurgence of urban settlers, cities could be permanently re-scaled to something smaller. There's a new movement to reclaim urban areas by clearing parts of them and even letting them go back to nature.

Instead of waiting for an economic or growth upswing that might never come, county and city planners can work with land bank properties to pick and choose which neighborhoods to invest in, and which to bulldoze. In other words, why fight for more growth when downsizing and re=greening a city might make the city more viable and more livable for those who remain? Business could be relocated into more dense, more transit friendly neighborhoods. Cleared areas could be turned into open space, parks, greenbelts, or even forest. It would be a reversal of urban sprawl.

If you are interested check out the Shrinking Cities Institute.
Posted by mides@hunter.cuny.edu at 6:00 AM

For more info check out: