Protecting the River or Nimbism? 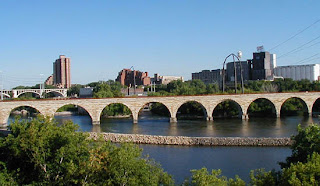 Article below:
Parking lot, park or apartment complex?
By Cristof Traudes
Developers want to build a second phase of the Stone Arch Apartments. Neighbors say it’s on the wrong side of Main Street.For an example of what happens when a group of developers has an idea for a site that has a half-dozen plans and a concerned neighborhood attached to it, read closely.

First, some history: In the early part of this decade, Bluff Street Development created the Stone Arch Apartments near St. Anthony Main despite a heavy flank of disapproval from the Marcy Holmes neighborhood and the University of Minnesota. Overruling the outcry, the City Council approved a necessary zoning change in 2001. A lawsuit from direct neighbors Metal-Matic followed. That was later settled, the apartments were built and most controversy faded away.

Back to the present: Bluff Street is back, a sequel of sorts in hand. The scene is fairly familiar, with a similar name (Stone Arch Apartments, phase two), a plan for mostly small apartments, and the same general location — plus, like all good sequels, most of the original controversy’s cast.

Bluff Street wants to construct a new six-story, 98-unit mixed-use building on a triangular plot at 600 Main St., currently a parking lot between Stone Arch Apartments No. 1 and the Southeast Steam Plant. Steve Minn, a former City Council member and one of the project developers, said it would be a beneficial project, creating more housing in Minneapolis.

The site’s current zoning allows for a building to go up, but it doesn’t allow for some of the more unique ideas Bluff Street wants, Minn said. They want to be able to tilt the building so that it doesn’t block views of the Downtown skyline for Stone Arch Apartments residents. They want to add some distance from Main Street and include green space to reflect its park-like surroundings.

When Bluff Street approached the city to request a rezoning, here’s what happened: The Marcy Holmes neighborhood, the Friends of the Mississippi River, the Friends of the Riverfront, Council Member Diane Hofstede (3rd Ward) — all came out strongly in opposition, providing numerous concerns.One was a case of aesthetics. The development would be located at what some Marcy Holmes residents consider the gateway to their neighborhood. The view of anyone heading northeast on the Stone Arch Bridge would likely be overwhelmed by the sight of the new building. Irene Jones, of the Friends of the Mississippi River, called it a wall at the end of a scenic artery.“We just have one riverfront, and we’re very protective of it,” said Melissa Bean, executive director of the Marcy Holmes Neighborhood Association.Another argument involved precedence.

Despite the boom of new residential projects along the Marcy Holmes side of the river, none have been proposed or built on the Mississippi’s side of Main Street. More than any other argument, though, this is what was most repeated: A 1978 agreement signed by the Minneapolis Park and Recreation Board marked the site as a probable plot to be purchased or condemned for parks purposes sometime in the future. A 1982 Park Board plan for Central Riverfront Regional Park labels it a parkland parking lot.

The Marcy Holmes neighborhood plan marks it as green space. At least three more plans continue in the same vein. Not one labeled it a site for development.“This is not an ordinary parcel of land,” Hofstede said.But does it matter?Not really, according to Bluff Street. They own the site, and they can build regardless of the rezoning. It’s simply a matter of the quality of what will be built, Minn said.Still, the arguments weighed on members of the City Council’s Zoning and Planning Committee. They denied the rezoning by a 3-2 vote.

While they can’t direct Bluff Street to build a park, they said they couldn’t support possibly intensifying development along the river.Council Member Lisa Goodman (7th Ward), who dissented, was concerned the committee set up Bluff Street to build a lesser building.“I think it’s a case of be careful what you wish for,” Goodman said.But committee Chairman Gary Schiff, of the 9th Ward, said council members weren’t calling a bluff. There’s no guarantee, after all, that Bluff Street would build anything, without or even with the rezoning. In other words, maybe the developers will have a change of heart and 600 Main St. could end up parkland after all.

“This is not going to be a park,” Minn said adamantly. Or not.
Posted by mides@hunter.cuny.edu at 6:00 AM

I don't know what to make of this. However, the Stone Arch Bridge and surrounding park area is visited quite often. Parking is always a hassle. With this proposal, there is less parking for non-locals and more congestion.