Road to the Future 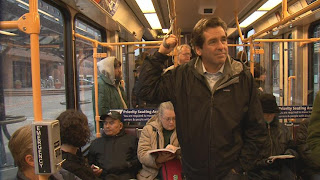 Another Great installment from the PBS show Blueprint America:

Over the next 40 years, America’s population will grow by more than an estimated 130 million people - most will settle in or near the country’s major population centers. At the same time, an unprecedented multi-billion dollar public works investment has just been made by the federal government to rebuild both the weakened economy and stressed national infrastructure. And, Congress is about to consider a transportation bill that will determine the course of the nation’s highways and transit for years to come.

On May 20th, Blueprint America: Road to the Future, an original documentary part of a PBS multi-platform series on the country’s aging and changing infrastructure, examines the choices we can make as the country invests in its infrastructure, and how they can affect the way we live.

Host and veteran correspondent Miles O’Brien goes to three very different American cities - Denver, New York and Portland, and their surrounding suburbs - to look at each as a microcosm of the challenges and possibilities the country faces as citizens, local and federal officials, and planners struggle to manage a growing America with innovative transportation and sustainable land use policies.

With roads clogged and congested, gas prices uncertain, smog and pollution creating health problems like asthma, cities that once built infrastructure to serve only automobiles and trucks are now looking to innovative new forms of transportation systems - like trolleys, light rail, pedestrian walkways and bike paths.

Whether it is talking to residents pushing sustainable development in the Bronx, smart growth in Denver, or a journalist in Portland whose beat is bicycling, Blueprint America finds a common theme: America’s love affair with the car may be a thing of the past.

Watch it here.
Posted by mides@hunter.cuny.edu at 11:34 AM