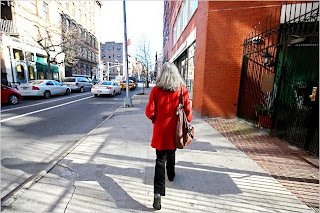 Jane Jacobs had grown into what she was fighting against: orthodoxy. Today planners, developers, architects, and basically anyone who has read the book has quoted Jane Jacobs to justify the project or goal that they wanted to get done. Jane Jacobs is now used to implement the things she was trying to fight against. But did she paint a picture that was to idealistic and didn't take into account gentrification, displacement, and other urban concerns? The real question: when does a neighborhood become too successful?

Sharon Zukin believes that Jane might have been on the wrong path all along. From this NY Times article:

But if Ms. Jacobs is much hailed as an urban prophet, Ms. Zukin is a heretic on her canonization. She views Ms. Jacobs as a passionate and prescient writer, but also one who failed to reckon with steroidal gentrification and the pervasive hunger of the upper middle class for ever more homogenous neighborhoods.

The pattern in places like Williamsburg and Atlantic Yards, Ms. Zukin said, is dreary and inexorable: Middle-class “pioneers” buy brownstones and row houses. City officials rezone to allow luxury towers, which swell the value of the brownstones. And banks and real estate companies unleash a river of capital, flushing out the people who gave the neighborhoods character.

Ms. Jacobs viewed cities as self-regulating organisms, and placed her faith in local residents. But Ms. Zukin argues that without more aggressive government regulation of rents and zoning, neighborhoods will keep getting more stratified.

The new gentrification is upon us:

There’s the Magnolia Bakery, where perpetual lines snake out the door not so much because of its excellent cupcakes as because of its appearance on “Sex and the City.” There’s Marc Jacobs, where the lines are no less endless. A Ralph Lauren, a Madden, and a children’s store with the most adorable petite $250 pants. Ms. Zukin sighed.

“It’s another Madison Avenue, or the Short Hills mall,” she said, waving her hand dismissively. “Really, did we need that?”

One might shrug off her lament as a song soaked in nostalgia. But Ms. Zukin draws on new scholarship suggesting that this is not the old gentrification, the house-by-house accretion familiar to Ms. Jacobs. What happens now, she said, is powerful and breathtakingly fast — a product of upper-middle-class aesthetics, and newspapers, magazines and blogs that compete to find new “destination neighborhoods.”

Is Jane Jacobs wrong or has the world changed since she wrote her ground breaking book? I would say that it might be a bit of both, but who could have predicted what is happening today 40 or 50 years ago.
Posted by mides@hunter.cuny.edu at 5:00 AM

The criticisms of Jane Jacobs by Zukin and the NYT article make it clear that neither author has actually ever carefully read Jane Jacobs.

In Death and Life, Jacobs presciently describes the process by which gentrification occurs in a chapter called "The Self-Destruction of Diversity." Namely, an urban neighborhood becomes attractive due to its diversity. Lots of people want to live there, because there are so few good urban neighborhoods in American cities. Rents skyrocket, and the very things that made the neighborhood an attractive place are forced out, leaving a sterile corporate landscape.

Anyone that has actually read Jane Jacobs would never claim she failed to understand the process of gentrification. She also proposed some government solutions in later chapters of Death and Life, which Im sure Zukin and other critics never bothered to read.