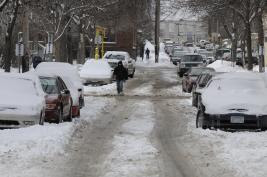 While the East coast and Mid-Atlantic have been hit hard with snow, we are lucky enough in the Twin Cities to have the snow fall, and with our cold temperatures, never melts. The result this winter has had the ups and downs, but one advantage is snowcalming. Basically so much snow accumulates on the streets it pretty much turns all the streets into very narrow streets where only one car can pass at a time. This results in people moving slowly and much safer environment for pedestrians and cyclists.
While you might think these streets are bad to ride on, they do clear up nice for cyclists, but the width pretty much stays the same. MPR had this story:

All the snow is also causing headaches in Minneapolis. City officials created a video to publicize the rules regarding the parking ban that was instituted last week for the first time in nearly a decade, which restricts parking to one side of some streets until early April.

The video shows a big red fire truck barely squeezing between parked cars on a residential block. Alex Jackson, Minneapolis fire chief, faces the camera and says "vehicles parked on the even side of non-snow emergency streets can be ticketed and towed, in an effort to make these streets easier to navigate for fire trucks, ambulances and other emergency vehicles."

Living in the tundra does have its advantages at times.
Posted by mides@hunter.cuny.edu at 5:00 AM