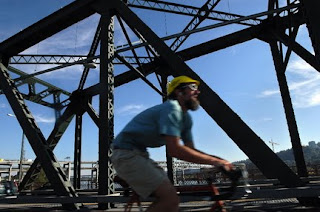 Portland's Mayor Sam Adams wants a $600 million bike plan to be implemented for 2030. While knee jerk reactions are the norm, this article makes some great points:

The 2030 Portland Bicycle Plan, envisioning a future when 25 percent of trips are made by bike, is expected to coast to approval when it goes before the City Council on Thursday. It's easy to green-light America's most ambitious investment in bicycling when it would be funded down the road. But according to city transportation officials, the plan to build 681 miles of new bikeways over the next 20 years will eventually cost $613 million.

By comparison, the MAX Green Line cost $575 million, and all transportation projects in the metro area add up to about $630 million a year. Portland Mayor Sam Adams doesn't flinch at the estimated cost. He talks of making neighborhoods more livable, transportation more affordable and reducing greenhouse gas emissions 80 percent by 2050. "Can we do those things without this bike plan?" Adams said. "I think it would be very difficult."

More than $600 million for bicycle improvements "is definitely a big number and I appreciate that," Geller said. "But in transportation dollars, it goes a long way." By contrast, he said, "It would build only about 12 miles of urban freeway."

An extensive bike network that can get people using bikes up to 25% or 12 miles of freeway, hard choice for sure.
Posted by mides@hunter.cuny.edu at 5:00 AM