Too many roads in Minnesota 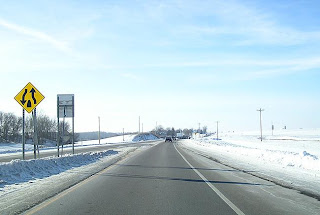 As many of you know, who have been following my blog, I relocated over a year ago to the Twin Cities. I will say it was a great decision and I haven't regretted it at all. Transportation planning, in the Twin Cities, the region, and the state is something of a mystery to me. We have way too many roads and way too many expressways in the Twin Cities region and state. During rush hour the expressway gets congested and it is actually safer and faster to take the regular roads. That seems to be a major indication that something isn't working right.

In many ways some of the expressways function very well for those that need to commute from farther distances (yes, we love our sprawl), but one thing has been bothering me since I moved: Minnesota simply has too many road for it's population. Think about it for a second. MN's population hovers around 6 million. The problem is population wise we are number 21 on the list and our metro region is only 3.1 million, almost the entire population of Chicago. Why is it that we have the 5th largest network of roads?

So this story from MPR struck a cord with me the other morning:

For more than 60 years Minnesotan's interested in new roads and bridges have operated on a generally safe assumption. Make your case, wait your turn, maybe five, ten or even twenty years, and eventually the state will smile on your project and it will be built.

As long as ten years ago, and much more intensely the past two years, the new reality dawned. There isn't enough money to build everything on everybody's list of transportation needs.

More seriously, there isn't even enough money to maintain everything that's been built.

Wow, not sure how this anomaly in the upper Midwest happened. We have less population in the entire state than some of our largest cities, but Minnesota ranks 5th for the most roads.

"Some of our estimates indicate if we were to do that it would be equivalent to a $2 increase in gas tax, which I think most people would agree is unrealistic," McCarthy said.

A shortage of money for transportation will likely influence one of the state's most pervasive trends. Cheap gas and good roads have allowed people to live nearly anywhere they want.

My other issue is they refer to this as transportation = more roads. MPR and Minnesota need to join the rest of the world, not necessarily the US, in what is a transportation revolution. BRT, heavy rail, light rail, high speed rail, street cars, and serious bike networks seem to be the way other countries are dealing with the transportation problem, not moaning that the funds aren't there for projects that should not even been approved in the first place some 20 years ago.
Posted by mides@hunter.cuny.edu at 5:00 AM

fascinating. thanks for shedding light on this. all the rest of the country hears about are those poor Minnesotans and their breaking bridges. Seems like too much steel and concrete have been wasted on paving out the land o' lakes.