Is Blight the New Eminent Domain? 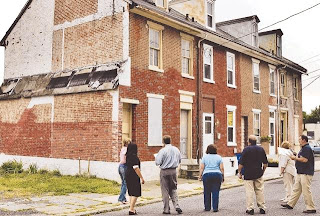 Diana Lind at Next American City has this great post talking about how "blight" is now being used as a tool for urban renewal. I deal with this issue a lot in my day to day work, but this really gets to the issue of who is defining blight and for who? Usually projects that are initiated in the community, or have strong community support, never tread down this path because they don't have to. Atlantic Yards in Brooklyn is a great example of not getting community buy in or input early on and had resulted in law suits. When the word blight is used, nine out of ten times it is because someone from the outside is moving in.

While I would agree that there is much vacant land in the Atlantic Yards area, that there is an “inadequate street layout” and other problems, the fact is that the neighborhood is fairly vibrant nonetheless. And while I think that the train yards could be revitalized, I don’t think that other buildings, where people currently live and don’t want to leave, need to be taken over. Is the definition of blighted problematic or is the whole concept of eminent domain the problem? I’m curious to know if there are lots of instances when non-controversial eminent domain usage radically transformed a neighborhood into a much better place.

This is not to say blight is not a real factor in redevelopment and new projects. What is really key is that blight be determined by the community, because blight can take many different sizes, and one size does not fit all.
Posted by mides@hunter.cuny.edu at 5:00 AM

afaic, jane jacobs totally discredited the entire concept of 'blight' and 'cataclysmic money'. even allowing politicians to talk about 'blight' is dangerous. we need a new word or definition or something.