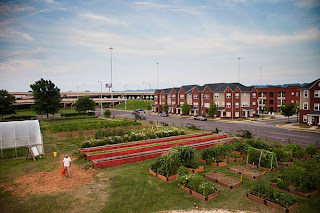 The new movement has started and it seems we are all finally catching up. Urban Farming was an oxymoron for years. Why would we farm in the middle of dense, dirty cities. With the recent events it seems that land has become affordable enough that we can not use it for more than just development of retail, commercial, or residential. Green space is all the rage, but urban farming can provide a real benefit for neighborhoods with no real healthy food options.

Jones Valley Farm is just one of our recent urban successes. From the Grist article:

In fall 2001, Edwin Marty and Page Allison drove across the country, back home, to start a farm. That might be when the Breaking Through Concrete idea began.

Edwin and Page had been living on the West Coast, farming in Baja, Mexico, and instructing youth at Washington’s Pacific Crest Outward Bound School. The young 30-somethings belonged on the West Coast, surfing and teaching among the burgeoning, youthful tribe of educated, worldly organic farmers. But Birmingham needed them more than any of the progressive, farm-friendly towns out west.

Jones Valley Urban Farm began on a skinny vacant lot in Birmingham’s Southside neighborhood. Abandoned houses surrounded the weed-and-rubble-strewn plot. A corner convenience store across the street sold everything but wholesome food. The afternoon ice-cream truck supplied the freshest food for miles. That is to say, this food desert was not much different than most neighborhoods in downtown Birmingham and much of Southside. But, just up the street, Frank Stitt’s James Beard Award–winning restaurants were catching the first wave of the national Slow Food movement and tapping into the regional bounty of the Deep South, from Apalachicola Bay oysters to Black Belt, Alabama, produce. And every Saturday in the summer, the Pepper Place Market, about 20 blocks away, sold produce and fruit from Alabama farms to a growing consumer pool.

This would be great to replicate in our neighborhoods in cities through out the U.S.
Posted by mides@hunter.cuny.edu at 10:53 AM