The Leaf Sells out 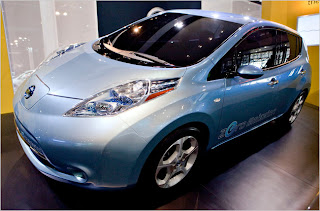 In today's world it seems hype can just about sell anything. How many people really needed the iphone when it came out? It seems just about everybody has one these days. Well, the news in the automotive world is that the Nissan Leaf, with its preorders, is already sold out. 19,000 vehicles have been presold in the US and Japan and should be hitting the dealers later this year.
I have to ask the questions why so much hype about electric cars now? It seems we are spinning our wheels since we have been through this before. I really don't see this making any progress forward other than reduced environmental impacts.
From a NY Times story:

Among the other electric vehicles planned for sale in the United States within several years are a battery-powered version of Ford’s compact car, the Focus, and the Tesla Model S sedan, which will be built in California as part of a new partnership with Toyotaannounced last week.

The preorders for the Leaf include 13,000 in the United States, where dealers take a $99 deposit, and 6,000 in Japan. Mr. Ghosn said sales in the United States would be concentrated in areas where there was sufficient means to support electric vehicles, like cities in California and other states that are installing charging stations.

We are going to charge large amounts of money to purchase these cars and then waste money building additional infrastructure for a means of transportation that seems to be less than worthwhile these days. For too long now cars have dominated our way of thinking how we move ourselves to get form point A to B. It might be time to start investing in real transportation infrastructure that gives people choice, rather than another monthly car payment.
Posted by mides@hunter.cuny.edu at 5:00 AM

Reduced environmental impact is a pretty huge gain in my opinion. Some people are simply never going to give up driving a car, it's etched into their brain. At least with electric cars when the person is sitting in gridlock they're not poisoning the air too.