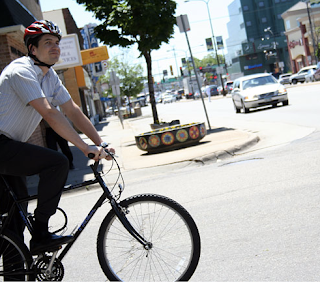 University Avenue is the main thorough fare to get from St. Paul to Minneapolis without using one of the many freeways we have in the Twin Cities. University Avenue is also where the new LRT line will be running in 2014. Over 80% of on street parking is going to be eliminated and only two lanes of auto traffic will be allowed. With the new design that will accommodate the new LRT line one this has been lacking: bikes. Bikes using University Avenue have never really made it into the discussion or even considered in the planning process for the new line.
Russ Stark, Saint Paul Council Member, had this to say in this MPR story:

University Avenue isn't what you'd call a scenic route. Russ Stark, a bike-riding St. Paul city councilman, says all the trucks and cars can make for an unpleasant ride. "It's not my favorite place to be on a bike. It's pretty dirty, and loud, and hot," he said.

Stark is standing with his bike on University Avenue, near the western edge of St. Paul. Just north of him is an expansive rail yard where many other east-west streets come to a dead end.But he does find a practical elegance in this wide, urban thoroughfare. It's the most direct street that connects downtown St. Paul to Minneapolis and the University of Minnesota.

"So University is such a straight shot -- it goes right through. The people who are used to riding in traffic and who don't mind the noise, dust, and cars use it all the time," he said.

Two years ago, Stark floated what seemed like a radical idea: Cut the number of vehicle traffic lanes from four to two. That would make room for the planned light-rail trains, bike lanes, as well as street parking. But when that idea didn't meet federal funding standards that were in place at the time for light-rail projects, Stark backed off.

Since the new line has taken years to become a reality many things have been lost in the process not to jeopardize the project as a whole. Now we have to do the work of looking what we have and making that work. Some fights have been fought and resulted in victories, but I know that the bike lane argument for University Avenue is going no where and fast. I think we are much better off fighting for a better bike network in St. Paul in other areas where more people will actually ride, otherwise we might end up wasting a lot of political capital on University Avenue.