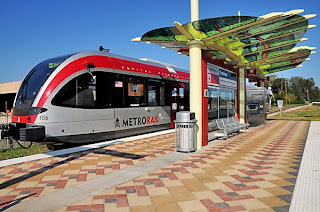 So Austin finally has got it's first LRT line, but it seems the jury is out on this low budget and low rider starter line. Unlike many other cities that try and hit a home run the first time out (with the hopes of wide acceptance and future expansion) it seems Austin has taken the very safe route. Is that really wrong?

According to this article the Metrorail is going to be a huge failure. Yes, it only has one car and runs on freight lines (we know about that here in MPLS with the North Star Line), and only has one track for most of the line. I would agree that the odds are stacked against this first line, but that doesn't mean we should give up hope. I really like the approach this commenter took:

Let me start by saying I believe America should go back to rail as the major mode of transportation for both products and passengers. In saying that, what’s wrong with trying something on a smaller scale first? It cost less money and you still get an understanding of how popular or unpopular it is with citizens. It’s like a child saying he wants mango ice cream supersized but he has never tried it. As a parent I would ask for a sample size first, which would be less expensive, and if he likes it then I would buy the bigger version. I also believe, in some cases, you only get one chance to make a good first impression. If efficiency is the problem you’re having okay, but if you think building transit lines on a much grander scale will work you’re wrong. In the end if bigger doesn’t work you’ve just cost tax payers hundreds of millions if not billions of dollars. It sounds just like big government making tax payers fit the bill for grand projects that could have started out on a smaller scale first.

So did Austin play it too safe with this first line or will it create enough excitement for more LRT and street cars down the road?
Posted by mides@hunter.cuny.edu at 5:00 AM