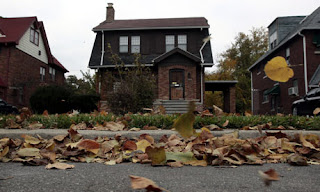 Detroit is in trouble and has been for some time now. $1 homes are not the way that this city is going to make a small climb back to its former glory. While this is a very top down approach, Detroit needs to get its density back. Yes, this means that raising entire blocks and clustering the housing should be a new approach. Let's get the folks closer together, share the infrastructure, and improve the mass transit system. For the land, it seems Detroit is well on its way to urban farming and feeding themselves.

Once again I am troubled by the cheap homes (that need serious capital to be livable) seems to mean housing for artists. I am not under the impression that this can't play some role in Detroit's future, but it can only be one very small piece to a much larger plan.

Here is a quote from this Guardian article:

Some might say Jon Brumit overpaid when he stumped up $100 (£65) for a whole house. Drive through Detroit neighbourhoods once clogged with the cars that made the city the envy of America and there are homes to be had for a single dollar.

You find these houses among boarded-up, burnt-out and rotting buildings lining deserted streets, places where the population is shrinking so fast entire blocks are being demolished to make way for urban farms.

"I was living in Chicago and a friend told me that houses in Detroit could be had for $500," said Brumit, a financially strapped artist who thought he had little prospect of owning his own property. "I said if you hear of anything just a little cheaper let me know. Within a week he emails me a photo of a house for $100. I thought that's just crazy. Why not? It's a way to cut our expenses way down and kind of open up a lot of time for creative projects because we're not working to pay the rent."

Houses on sale for a few dollars are something of an urban legend in the US on the back of the mortgage crisis that drove millions of people from their homes. But in Detroit it is no myth.

My experience here in the Twin Cities has proven to me that even a dollar house is usually not worth it. The foreclosure crisis and years of neglect have made many of these home financially unfeasible to rehab because the costs exceed the cost to build new. While I am usually the last person who wants to see homes torn down, Detroit has some hard decision to make moving forward.
Posted by mides@hunter.cuny.edu at 5:00 AM