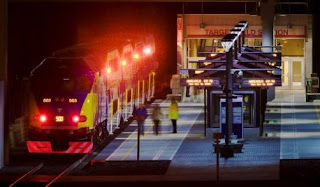 The North Star line just opened here in the Twin Cities. From most accounts, it has been a huge success. Jill Burcum at the Strib points out one major flaw in the new commuter rail - limited schedule.

But after taking Northstar to work on Monday -- couldn't resist riding on its first official day of operation -- I'm back behind the wheel of my dusty Volkswagen. And with rare exceptions, maybe snowy days that really snarl traffic, that's where I plan to stay. The reason? The state's sparkling, much-needed new rail line has an Achilles' heel barely mentioned during last week's inaugural festivities: its limited schedule.

For those of you not all that familiar with the Twin Cities, our rush hours tend to start early and end early. Downtown Saint Paul can look like a ghost town at 5:30. With that said it seems the new North Star line has followed that schedule as well. While this was a huge negotiating point since the rail is running on a freight line, its seems to be a bit short sighted since some folks actually need to get in later and leave later for their jobs.

By design, it serves commuters lucky enough to have an 8-to-5 schedule who never work late, but few others. If you're relying on Northstar to see the Holidazzle parade, for example, you're out of luck unless you go on a Saturday. On Thursdays, Fridays and Sundays, the last train out of Minneapolis leaves before the first light-filled float rolls down Nicollet Mall at 6:30 p.m. Planning to take in the Twins, see the Timberwolves or cheer on the Vikings? Some home games fit Northstar's regular schedule, but a fair number may not. Fortunately, Northstar can run additional special trains to serve sports fans or others attending big events, but only 30 times a year. The Twins alone have 81 home games in 2010.

I agree,
the beautiful part about other cities is that transit doesn't stop at the end of the work day. Later trains, in my mind, would encourage commerce in the downtown area. Shopping, dining and um, drinking etc. It seems that the very limited schedule really ignores an important facet of why people drive. Is there any indication of how/if the schedule will change when a certain big-deal-stadium opens? A later departure might help boost this aspect of downtown business AND keep a few folk off the road that maybe shouldn't be driving... I guess ideally that would make downtown a great place to work, the burbs a good place to live and the train a viable link between the two.
I get to hold my breath for the central corridor light rail.