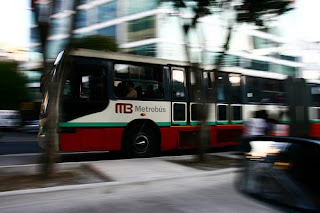 It seems in the US it takes 5-10 years to plan for a major transportation project. Yet, around the world other cities get transit, especially BRT, up and running in just a few years. Mexico City is the latest city to push the envelope and get a BRT system up in a city that is choked with grid lock. The Atlantic has a good article:

The Mexico City Bus Rapid Transit (BRT) System, a public transportation system in the heart of a city better known for its smog, is a novel initiative to help reduce greenhouse gas emissions and hazardous air pollutants from cars and minibuses, as well as the commuting time for workers, students and others who flood the city each day.

Metrobús also offers a remarkable example of how to put a new transport system into place in a relatively short time, how to foster cooperation over competition in a city known for its rough-and-tumble politics, and how to create a public-private transport system that does not rely on massive public subsidies. In other words, not business as usual

In 2005, a mere three years after planning began, clean, energy-efficient, high-capacity buses began carrying passengers down dedicated bus lanes on Avenida de los Insurgentes, the city's main north-to-south traffic artery and one of the world's longest urban avenues. Since then, expansion of the Insurgentes line and the addition of a second line has resulted in about 450,000 passengers each day riding buses running on clean-burning ultra low sulfur diesel fuel along routes currently totaling 51 kilometers (about 32 miles).

Can the Twin Cities and other US cities learn a lesson here. That with private/public partnership and proper planning we should have new transit in years, rather than decades. While I realize it always sounds easier than it is, we really need to figure out a new approach for planning, funding, and execution for our future transit lines.
Posted by mides@hunter.cuny.edu at 5:00 AM