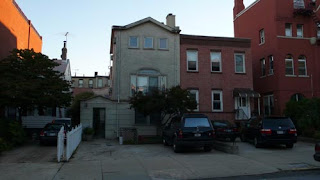 In NYC every square inch of land is overvalued. For years home owners have taken it upon themselves to create front driveways by paving over the front yard. This is the worse case of density and auto abuse. In a city with such small amounts of green space, the paving phenomenon has been going on (front and back) for years. It finally looks like that is about to change:

The Department of City Planning has proposed regulations that would restrict certain homeowners from paving over their front yards to create parking spaces, a move that could alter the residential streetscape, especially in boroughs like Queens and Brooklyn.

Responding to residents’ complaints of unsightly concrete driveways and lost street parking, the new rules would restrict so-called curb cuts — the sidewalk indentations created to allow cars to move from the street onto the front yards of houses — and tighten front-yard “planting” requirements. They would also require certain residential building owners to add parking if they modify their buildings.

Like the PlaNYC and other recent Bloomberg administration initiatives, the rules hold the potential for making the city more pedestrian friendly and create more green spaces. But if approved, they would inhibit homeowners who want to carve out parking spaces on their own properties.

Hopefully this new regulation will help the concrete jungle change the way we use space and think about it. Private home owners do have rights, but visual and physical pollution are real challenges that impact the livability of blocks, neighborhoods, and communities.
Posted by mides@hunter.cuny.edu at 6:00 AM

Cool blog, not many propertys have a driveway to park their cars on.