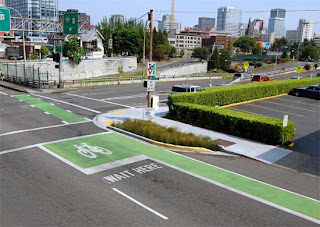 OK, I really like Portland. So much, that it was on the short list of places to relocate last year. Ultimately the Twin Cities won out (I am very happy in my new home). SF Streets blog has this great write up on the streets of PDX. Portland still has its issues to work through, but I like the direction they are heading.

Portland's greenstreet facilities often take up multiple on-street parking stalls and replace the asphalt with beds planted in native species that help absorb significant volumes of streetlevel wastewater, near 100 percent in some locations. Facilities include swales, curb extensions, planters, and infiltration basins, and are typically linear and pool 6 to 9 inches deep [PDF]. David Elkin, a Landscape Architect working for Portland's Bureau of Environmental Services (BES), explained on the tour that the first experiments with greenstreet facilities in Portland were necessitated because the city had to meet mandates in a Clean Water Act lawsuit for polluting the Willamette River, which flows through Portland.

The city faced the challenge of increasing the number drainage pipes in east Portland, at a cost of $150 million, or develop another solution for reducing "upstream" water volumes, those that came from surface streets. By adding the greenstreet facility network, which initially cost $11 million, the city met its target stormwater capture and estimated that it saved $60 million in pipe replacement costs.

What I like is that PDX has made these changes with existing space and nothing too radical. I really would like the Twin Cities to take a similar approach on how to create a better environment for all transit users.
Posted by mides@hunter.cuny.edu at 1:05 PM