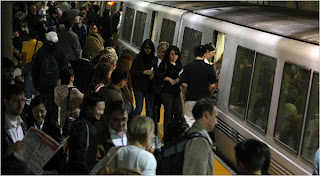 2008 was a watershed moment in America. Since the creation of the interstate highway system it was the year that ridership of public transit had surpassed the numbers before the highway system was created. This is the opportune time to further advocate for more investment in transit, but instead, we see a stimulus package that is more disinvestment in our current systems. While some capital projects are still a go, cities across the nations are slashing services while raising fares. Here is an excerpt from a NY Times article:

Although the federal stimulus law included $8.4 billion to help transit systems pay for construction, repairs and new train cars and buses, the money cannot, for the most part, be used to pay for operating expenses like salaries. So some systems are cutting routes, laying off workers and raising fares.

Now many transit advocates, who have long said that transit gets shortchanged by a federal government that devotes far more money to highways, are turning their attention to Congress, which could pass a new transportation bill as early as this fall.

David Goldberg, a spokesman for Transportation for America, a coalition of groups pushing for an overhaul of transportation policy, said lawmakers should take note of the higher ridership.“This is the leading edge,” Mr. Goldberg said, “of a continuing surge in demand for public transportation and more walkable neighborhoods as the population ages, convenience and access become more critical and gas prices remain volatile.”

The choices we are making today are going to have serious consequences down the road. Let's hope we start making better informed decisions about transportation.
Posted by mides@hunter.cuny.edu at 6:00 AM