Biking is better in NYC 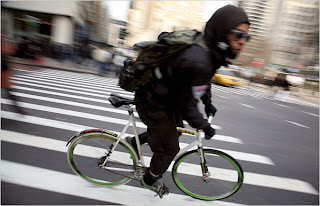 Robert Sullivan in this NY Times article discusses how things have changed for the better on NYC street for cyclists. Below are some of my favorite snippets:

To be clear, cars are more likely to kill nonbikers; we still live in a world ruled by the ruthless car. But as someone who has been knocked off his bike by an S.U.V. making an illegal right on red (pretty hard, but I just got bruises and a busted front wheel), who has been hit by a cab veering into a bike lane (not that hard) and who has been knocked down as a pedestrian in a crosswalk by a Ford Econovan (really hard, as in broken knee, lots of stitches in the head and weeks of crutches and physical therapy), I admit that my knees feel wobbly when I see a guy ride against the light in a busy intersection with a child in the seat behind him.

Though bikers are hated, pedestrian deaths and injuries on Ninth Avenue in Chelsea immediately declined in the area of the physically separated bike lane, as reported on streetsblog.org, news blog of the Livable Streets Initiative, which advocates creating sustainable cities. In December, Community Board 4 voted in favor of creating a bike lane on Eighth Avenue between 14th and 23rd Streets.

As far as bikers go, I’ve become a kind of laughingstock because I wait at traffic lights. Recently, as I waited in a bike lane at Atlantic Avenue for a light to change, a woman in her 70s, walking hunched with a cane, approached the crosswalk smiling — until she spotted me. Then she began shouting as I waited behind the crosswalk, “Well, are you going to stop?” I assured her I was waiting. She grimaced. “How do I know you’re not going to go?” she asked.

Bikes don’t kill people; cars kill people. I know this, I feel this (big scar on head), and when I think of my bike heroes and bike role models, when I imagine the tone of the new bike culture, I think of civility. I think of Murray Kempton, the great baroque sentence maker who wrote for The New York Post and The New York Review of Books and biked on what I remember as a three-speed, pedaling to his word processor, wearing an early Walkman.

Posted by mides@hunter.cuny.edu at 4:35 PM