A Regional Approach to Urban Affairs 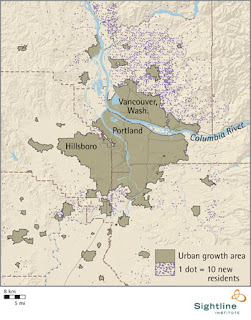 Neal Peirce at citiwire has this good commentary on how the new office of urban affairs needs to approach work on regions instead of cities or suburbs. Many in the urban and planning fields have been waiting for a regional approach that can successfully work through the red tape that has been created through the myriad number of partnerships and relationships that make up regional government bodies. Here are some excerpts:

Instead of primary focus on tired (and waning) subsidies for troubled inner cities, advocates for the new office are hoping for a radical shift to a federal partnership that focuses on entire metropolitan regions and their potential to produce innovation and restoke the American economy.

The reasoning’s straightforward. Unlike the hub-and-spoke city-suburban model of yesteryear, today’s 363 metro regions encompass broad swaths of multiple center cities, downtowns, suburbs and exurbs. The top 100 are an economic marvel: alone they account for 92 percent of air passenger boardings, two-thirds of major research universities, 75 percent of workers with graduate degrees, 78 percent of all patents.

The president recognized metros during his presidential campaign, saying Washington has been “wedded to an outdated ‘urban’ agenda” mired in antipoverty policy alone–that it’s time “to stop seeing our cities as the problem and start seeing them as the solution.” So he promised an urban strategy “that’s about South Florida as much as Miami, about Mesa and Scottsdale as much as Phoenix, about Stamford and Northern New Jersey as much as New York City.”

Obama’s selection of Bronx Borough President Adolfo Carrion to head the new office was a touch unsettling to some supporters of a more metro-oriented urban approach. They worry that Carrion’s experience is entirely New York City-related, without background either in city-suburban ties or federal policy.

I am glad the new office of urban affairs exists but the choice of Carrion was poor judgement. We need someone who has years of experience working on regional ideals, not city specific. It is yet to be determined how much policy will be dictated from the new office.

Nope. I'm not totally agreeing with you here.

A regional focus has its own consequences.

1) It legitimizes some of the growth patterns we've seen in the past few decades, where suburbs become edge cities and urban areas lose population.

2) It takes the focus off urban revitalization efforts - efforts that require more suburbanites to move into center cities. Efforts that have the goal of ending sprawl and focusing on community development.

3) It ignores that urban development (meaning center city revitalization) has become a declining federal focus for about three decades and that cities have lost their voice in federal and state policy.

4) Some say that a regional focus could include managing suburban sprawl, but usually this is framed in terms of involving suburban voices in the federal urban appropriations process. The suburbs have enough federal support through highway and housing subsidies. It is unrealistic to assume that suburbanites want a sustainable pattern of development.

5) It ignores the importance of revitalizing neighborhoods and dilutes that focus.