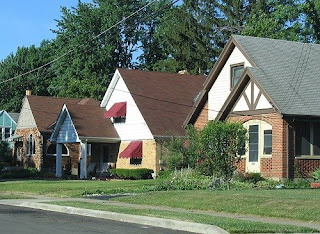 We find that many are critical of the suburbs, and rightfully so. Is it not time to stop arguing about their demise, and rather thinking about planning concepts that better connect suburbs with cities and rural areas. While Sprawl is the main issue, the urban planning field might need to rethink their approach to suburbs. The reality is that some people live in the suburbs and will continue to do so for decades to come. This globe and mail article addresses that issue.

Suburbanites are significantly more satisfied with their communities than people who live in cities, small towns or rural areas, according to a survey by the Pew Research Center's Social & Demographics Trends Project.

"Ever since there have been suburbs, there have been harsh critiques of suburbs - a common one being that they are suffocating places where people live lives of quiet desperation. Well, most suburbanites apparently never got that memo," said Richard Morin and Paul Taylor, the authors of the study.

What I see as the bigger issue is how do we create more viable transit options for those who live in the suburbs. We need commuter rails that get people into and out of cities, but we also need a local transit system that can get people from their door to the station. Park and rides are great, but could that not be supplemented with feeder buses, safe bike/walking routes, and even maybe a street car?

How do we introduce more retail and commercial space into the suburbs, so people can walk for some basic things, while still maintaining the residential feel that attract people in the first place. These are serious issues and something we need to start thinking about critically so that we incorporate the suburbs better into regional and city plans.

Here's what I question about the whole topic. How many of those happy suburbanites know another way? How many have lived in a city environment? If they haven't, how can they know the differences between the two if they have never known life outside of the culdesac?

The big misinterpretation here is thinking that "urban dwellers (or small town dwellers) who are not satisfied" means the same thing as "people who wish they could move to the suburbs."

Most of our urban areas are a mess of neglected infrastructure and misguided attempts to improve the urban environment by making it more suburban.

At least some of those urban dwellers are dissatisfied because there is no decent food shopping in walking distance, the bus service stinks, and bicycling is foolhardy. In other words, where they live is not urban enough.

Small towns? You mean those places that used to be towns but are now just a bunch of old houses and a Walmart?

For as long as I can remember, only Suburbia has been provided for by public policy and the economy. No wonder suburbanites are a little more satisfied.