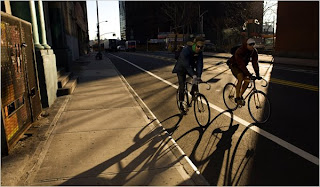 NYC has been on a war path lately trying to make it a better place to live by reallocating street space to uses other than moving cars. While most projects have been successful, the new bike lanes in Brooklyn on Kent Avenue have cause quite the stir. What is even more reveling is that not everyone in NYC is ready for this new city where street space is allocated more equally among its users. The New York Times has this good rap up of what is taking place.

New York City has created more than 100 miles of bicycle lanes in recent years to encourage and accommodate the number of people who, compelled by a desire to preserve the environment or preserve their bank accounts, have taken to getting around on two wheels.

But the effort to turn the city into a place that embraces bicyclists has clashed with a long-entrenched reality — New York is a crowded, congested urban landscape where every patch of asphalt is coveted.

The latest illustration of this reality — and among the more contentious — is playing out on the Brooklyn waterfront, where bike lanes less than two miles long have set off a verbal battle among a growing cast of interested parties, including business owners, residents, bicyclists and their advocates, and politicians.

I take the side of DOT on this one. Anyone who rides a bike knows that the low traffic volume on Kent Avenue is one of the best places to ride in the city. In addition, it will eventually be a part of a greenway that goes along the waterfront in Brooklyn. It seems these days those who scream the loudest seem to get their way.
Posted by mides@hunter.cuny.edu at 11:39 AM