Officer Is Indicted in Toppling of Cyclist 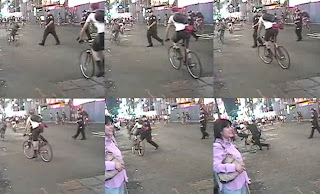 The officer who knocked a cyclist (more like body checked) during critical Mass in NYC months ago has been indicted by a grand jury. The NY Times City blog reports:

A police officer who was caught knocking a man off his bicycle in Times Square over the summer in a video that was distributed widely on YouTube has been indicted by a grand jury, according to lawyers involved in the case.

The officer, Patrick Pogan, has been instructed to report to State Supreme Court in Manhattan for the unsealing of the indictment, his lawyer, Stuart London, said. David Rankin, a lawyer for the bicyclist, Christopher Long, said the office of the Manhattan district attorney, Robert M. Morgenthau, informed him around 3 p.m. that a grand jury had voted to indict Officer Pogan. Mr. London and Mr. Rankin both said they did not know the specific charges, and Mr. Morgenthau’s office declined to comment.

It is believed that prosecutors were seeking felony charges of filing false records in connection with the police report that Officer Pogan filed after arresting Mr. Long. Officer Pogan, who was stripped of his gun and badge in July after the video emerged, also could be charged with a misdemeanor count of assault.

Posted by mides@hunter.cuny.edu at 3:52 PM