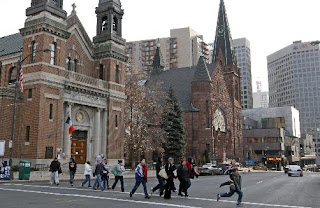 So the past week has been a media crazed one here in the Twin Cities where MPR tried to use its muscle to stop the proposed central corridor from going down Cedar. I think they miscalculated on both ends (public and political). The Star Tribune had this:

Minnesota Public Radio may stay or go, but the Central Corridor light-rail line will not be moved off Cedar Street in St. Paul, Metropolitan Council President Peter Bell said Monday. In a strongly worded statement, Bell criticized MPR for "using its airwaves and its website to rally its supporters" to push for moving the line off Cedar and away from its studios.

While MPR is a serious institution here, I think they poorly choose the way to breach this issue. I am happy that the Mayor and Met Council responded so quickly.
Posted by mides@hunter.cuny.edu at 2:58 PM