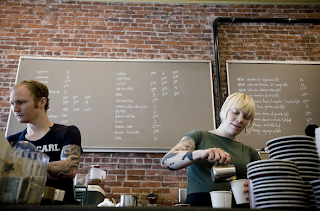 When neighborhoods, cities, and regions become to successful that people want to move there in droves it can sometimes have the impact that is not what that city had intended. Many places are the victim of their own success and it seems Portland these days is having that struggle about keeping its identity, while being on the national and international spot light.
This NY Times article explains:

Portland ranks high nationally for its rate of entrepreneurship, as measured by things like self-employment and the number of small businesses. Even during the recession, some local independent restaurants and manufacturers have increased sales and opened new outlets.

“We get people who self-select,” said Joe Cortright, a longtime economist here. “And there’s no fervor like the converted.”

That does not mean the local economy has figured out how to absorb the stream of newcomers: the Portland area’s unemployment rate was 10.2 percent in May, compared with 9.7 percent nationally.

The question seems to be can Portland keep its identity while being a victim of its own success? I guess we will just have to wait and see how they manage this over the coming years.
Posted by mides@hunter.cuny.edu at 8:05 AM

You know you want to hear