The Great Plains: Making a Come Back? 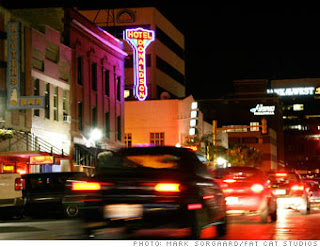 For people who live in the Great Plain states this news is no big surprise. For quite some time people have known that salaries are relatively high when associated with the cost of living. A dollar goes a lot further in North Dakota than say on the east or west coasts. What also is a key factor is the high quality of life that people enjoy. I have always thought there would be a steady migration to the area because good jobs can be had, housing is affordable, commutes are short, and schools are good. Regardless of the suburban or urban conflict, living in one the Great Plain states has its advantages once you get past the stereotypes.

Joel Kotkin has this great article and explains what is happening to attract these new comers:

The trend has been particularly strong in urban areas. Based on employment growth over the last decade, the North Dakota cities of Bismarck and Fargo rank in the top 10 of nearly 400 metropolitan areas, according to data analyzed by economist Michael Shires for Forbes and NewGeography.com. Much of that growth has come in high-wage jobs. In Bismarck, the number of high-paying energy jobs has increased by 23 percent since 2003, while jobs in professional and business services have shot up 40 percent.

That’s not bad for a region best known by East Coast pundits for the movie Fargo. It got so bad a decade ago that even local boosters suggested North Dakota jettison the “North” to make the place seem less forbidding. Two Eastern academics, Frank J. Popper and Deborah Popper, predicted that the region would, in a generation, become almost totally depopulated, and proposed that Washington speed things along and create “the ultimate national park.” Their suggestion: restock the buffalo.

Nowhere is this potential clearer than in Fargo, which is emerging as a high-tech hub. Doug Burgum, from nearby Arthur, N.D., founded Great Plains Software in the mid-1980s. Burgum says he saw potential in the engineering grads pumped out by North Dakota State University, many of whom worked in Fargo’s large and expanding specialty-farm-equipment industry. “My business strategy is to be close to the source of supply,” says Burgum. “North Dakota gave us access to the raw material of college students.”

While Fargo is mostly known for the movie (although very little of the actual film takes place in Fargo) it might just be the next big urban destination in the upper Midwest after the Twin Cities.
Posted by mides@hunter.cuny.edu at 5:00 AM