Is Target hurting or helping our cities? 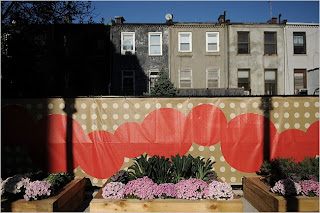 The Sustainable Cities Blog has this entry about Target supporting a community garden in Harlem:

Just last month, the Target East Harlem Community Garden was opened. On 117th St. just east of 1st Avenue, a new garden is growing with $300,000 of Target money. Much of this is going into an endowment for up keep. The rest was for the creation of the garden which includes a storm water capture system on the roof of the adjacent building, photovoltaic capturing discs (red to remind us of the sponsor), wind turbines, and of course the green garden itself. Focus groups were held within the community (only about a dozen people were spoken to though) before the design concept was drawn up. For the most part though, people seemed to want green space for children to play, seeing as there are already a few other nearby gardens that grow vegetables and produce.

What is interesting is the point they make about corporations stepping where cities should be funding these projects. While I completely agree, we no longer live in a world, unfortunately, when we can count on our city, state, or federal government to step in and make these community projects happen. On the flip side, would we rather not have the garden? I am not so sure this does mean corporate ownership. Corporations need to support neighborhoods and groups so why not let someone like Target fund a community priority. Honestly, many non-profits doing community work have relied on funding from corporations for years, even though it is not out in the open, would we really want them to stop providing their services to communities around the country? I think not. Here is the NY Times link.