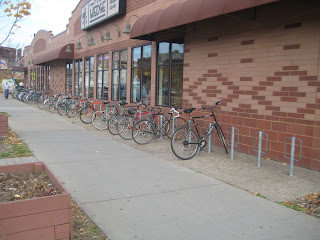 It has been a week and I have managed to ride to work, downtown, to St. Louis Park, and pretty much all around South Minneapolis. The first thing that struck me about riding around the Twin Cities, driver awareness. Coming from NYC where hitting cyclists and running over pedestrians is a daily event, the Twin Cities drivers are not out to run over every cyclist in their path to make it to their destination 5 seconds faster.

In NYC I was so use to drivers pulling out in front of me my muscle memory kicks in every time a car comes to a stop on a side street. So far, in the Twin Cities, these cars actually stop and wait for me to pass. Can you believe that.

On Saturday I was able to go to Trader Joes in St. Louis Park and 95% of the ride was on trails.

Two things I like about the trails: first, it really is a bike super highway. Second, they provide a great environment to ride in where all you have to worry about are the other trail users. Bike parking is every where (see pic above). Unlike NYC where getting a spot is like winning the lottery, the Twin Cities had plenty of bike parking around its commercial areas. It could do a lot better in residential areas.

Finally, it is getting cold. I had to hit the store today to get a base layer and a set of long underwear. I still need to get some smart wool socks for when the temps really start to drop. That is it for now.
Posted by mides@hunter.cuny.edu at 6:00 AM

We've got a ways to go, but if you don't have to leave minneapolis, you certainly can get everywhere easily on a bike. Great bike community too, shops, junkies, etc.

Justin, there is always room for improvements. I would really to see a second bike station downtown that caters to all non-vehicle transport.