The Store Front Window No More 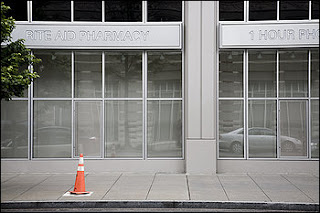 I am not sure when it happened, but it did happen at some point where retailers (chain and mom and pops) have decided a window is something that needs to be covered up. I have heard the numerous excuses in regards to safety, safety, and safety. It seems that some business owners don't realize the amount of customers they are loosing because you can't see into the store. There is zero transparency from the street to the interior of the store and vice versa.

These store fronts further kill what street life we have left. The Washington Post had this to say:

So the mature response might be to acknowledge that hollow, empty, blocked-out windows are simply a sign of the times, to be embraced as a truth about the new economy. But while windows were always an extension of advertising, they were also transparent, and transparency brings with it many happy accidents. The best of these is the vision of human activity -- even if in a CVS -- through the storefront.

That voyeurism, so essential to city life, can't be accounted for in a city code, a zoning ordinance or a phrase such as "street activating uses." But it is part of the fundamental substratum of sexiness that makes cities so exciting. A covered window is more than a concession to the hard realities of the retail economy or to the fear of crime. It is the loss of a form of consciousness -- the mutual regard of urban people for one another. It is the loss of an urban space that can't be found on any map, a place where you are on stage but not an actor, in the audience but part of the show, mixed up among I and you and we and us, a liminal space that has thrilled and terrified people since cities grew large enough to dissolve us in collective identity.

This is my plea to small business owners everywhere - FREE YOUR WINDOWS AND LET US GAZE IN.
Posted by mides@hunter.cuny.edu at 5:00 AM